The key to the development of TD-SCDMA mobile communication lies in the terminal, which has formed a consensus in the industry. A good mobile phone needs a good "core". Where is it? In short, nothing is integrated, stable performance, low power consumption and reasonable price. In fact, mobile phone manufacturers have the most say on how to judge the "core". Mobile phone manufacturers, especially brand manufacturers, have more experience in product performance stability and universality than chip platform manufacturers and even operators. They fully understand what kind of chips they need, and they also conduct extensive testing of their platforms and end products, even beyond the scope of testing specified by China Mobile. China Mobile's warehousing test has accumulated with the experience in recent years. With the continuous development of TD technology, its testing projects have been continuously enriched and improved, and the credibility of test results is naturally self-evident.

At the end of last month, ASUS Mobile and China Mobile jointly launched a smart phone using the Marvell PXA 920 chip. I believe that in the near future, a large number of TD smartphone models using the same chip will appear on the market. Marvell has been designing the PXA 920 chip since three years ago, and the first batch of films after half a year has entered mass production in January this year.

The Marvell PXA 920 is a highly integrated system-on-a-chip that is compatible with the ARM instruction set and is the first dual-mode (TD/EDGE) single-mode (Modem & AP) solution. The PXA 920 processor includes a powerful application processor and communication processor (wireless modem), which together with RF devices, intelligent power management chip, WiFi, Bluetooth, FM FM, etc. constitute a TD smartphone communication platform. The PXA 920 processor's TD smartphone can be said to be a four-chip machine, including a baseband chip, a wireless transceiver chip and an intelligent power management chip, plus a Marvell WiFi/Bluetooth/FM chip. This high level of integration can help mobile phones to be thin and stylish.

This article focuses on the features of the TD-SCDMA single-chip PXA920 smartphone solution.

The communications processor consists of a dual core of ARM9 and DSP with a packet processing accelerator and L1/L2 cache.

The triple-core hardware architecture has dedicated modem and application processor cores. Application processors with Marvell Sheeva CPU technology are backward compatible with XScale CPU cores. Based on such an architecture, the platform enables the reuse of the general purpose application processor software stack between multiple air interfaces and handset networks, and prevents harmful interference between the application processor (AP) and the modem separation subsystem. A high-performance internal memory architecture that enables external memory sharing without the additional cost and space overhead of flash and DDR. Using a shared external DDR between the AP and the modem, it has a high-performance, high-efficiency processor internal communication interface and reduces BOM cost. Figure 1 depicts a block diagram of the PXA 920 communications platform. 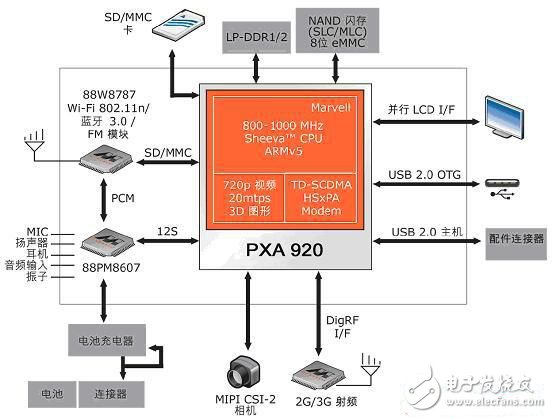 The terminal transmits data at high speeds up to HSDPA 2.8 Mbps and HSUPA 2.2 Mbps. The handset solution integrates a 3.5G modem and protocol stack to meet the standards of the world's leading carriers. 3G/WLAN/Bluetooth coexistence and support for IMS, VoIP and other advanced services from carriers. Verification through extensive IOT testing, GCF testing and field trial testing in China and transmissions in communication networks. 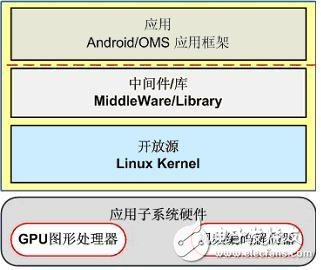 Second, the power consumption is small

Improving power management efficiency is key. Power management technology has always been the focus of attention, and the power management PM chip contains a number of patents. The first is to reduce the number of components, configure fewer sets of chips, and focus on reducing the amount of current. With the PXA 920, the universal charging interval is long, the standby time is longer, and the user experience is naturally more satisfactory.

The chip is small in size. Because of the small linewidth and high density, the PXA 920 chip package size is only 12X12 mm. Such a small area not only has the advantage of low power consumption, but also brings design space to the terminal. Users love a thin, stylish look.

Power optimization. At present, from the test of 2G, 3G voice and high-speed data download and upload, the power consumption is quite low. After a series of field tests, the power optimization has reached a level of excellence in the process of submitting engineering samples to mass production.

The price is reasonable. Targeting the mass market, so that the majority of users can afford it, that is, the price of low-end, high-end smart phones, is the common wish of operators and chip designers. When the cost of smart terminals is greatly reduced, it is the time when Internet data applications go to the public. To produce TD smartphones that ordinary people can afford, they must rely on technological innovation.

The semiconductor process uses 55 nanometer technology. The reduction in line width involves a series of decisions from design to wiring to process line. The newly-invested 12-inch wafer production line in China, from one step at 90 nanometers, across 65 nanometers to 55 nanometers and 40 nanometers, is worth considering cost factors. Future LTE products will be locked at 32 nm and 28 nm. The core of semiconductor technology is to maintain a high level of yield, which requires a wealth of experience and courage. The chip yield per wafer is increased and the cost is reduced.

The BOM is relatively low. After a single chip is highly integrated, the sleeve structure is very compact and the overall number of components is reduced. The PXA 920 processor itself integrates the communications processor and application processor onto the same SoC, leaving fewer chips. The chip sets mainly include RF devices, power management chips, and wireless devices including 802.11n, WiFi, Bluetooth, and FM FM functions.

Such a structure brings about a reduction in cost.

In short, strength is the last word. The reason why TD smartphone manufacturers are willing to adopt Marvell PXA 920 as the core processor is because of its competitiveness, because it brings three characteristics that users prefer, with thinner appearance, higher performance and better price. After a series of rigorous field tests in many cities, the PXA 920 is favored by many mobile phone manufacturers in the industry. In particular, through the testing of brand manufacturers, product performance stability and universality are expected to be higher than the current TD terminal products on the market. The PXA 920 platform allows mobile users to enjoy the enjoyable lifestyle of TD smartphones in an affordable economy.

The Mirror Wire are used for car recorder and car backing radar.

What does our product include?